Emergence of an organization is always through an evolutionary process. NDMA has also gone through the same stages. The Government of India (GOI), in recognition of the importance of Disaster Management as a national priority, set up a High-Powered Committee (HPC) in August 1999 and a National Committee after the Gujarat earthquake, for making recommendations on the preparation of Disaster Management plans and suggesting effective mitigation mechanisms. The Tenth Five-Year Plan document also had, for the first time, a detailed chapter on Disaster Management. The Twelfth Finance Commission was also mandated to review the financial arrangements for Disaster Management.

India envisions the development of an ethos of Prevention, Mitigation and Preparedness. The Indian government strives to promote a national resolve to mitigate the damage and destruction caused by natural and man-made disasters, through sustained and collective efforts of all Government agencies, Non-Governmental Organizations and People’s participation. This is planned to be accomplished by adopting a Technology-Driven, Pro-Active, Multi-Hazard and Multi-Sectoral strategy for building a Safer, Disaster Resilient and Dynamic India.

"To build a safer and disaster resilient India by a holistic, pro-active, technology driven and sustainable development strategy that involves all stakeholders and fosters a culture of prevention, preparedness and mitigation."

NDMA, as the apex body, is mandated to lay down the policies, plans and guidelines for Disaster Management to ensure timely and effective response to disasters. Towards this, it has the following responsibilities:-

The National Policy framework has been prepared after due deliberation and keeping in view the National Vision to build a safe and disaster-resilient India by developing a holistic, proactive, multi-disaster and technology-driven strategy for DM. This will be achieved through a culture of prevention, mitigation and preparedness to generate a prompt and efficient response during disasters. The entire process will centre-stage the community and will be provided momentum and sustenance through the collective efforts of all government agencies and Non-Governmental Organizations.

In order to translate this vision into policy and plans, the NDMA has adopted a mission-mode approach involving a number of initiatives with the help of various institutions operating at the national, state and local levels. Central ministries, States and other stakeholders have been involved in the participatory and consultative process of evolving policies and guidelines.

This Policy framework is also in conformity with the International Strategy for Disaster Reduction, the Rio Declaration, the Millennium Development Goals and the Hyogo Framework 2005-2015. The themes that underpin this policy are:- 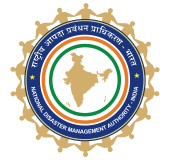 The NDMA Logo reflects the aspirations of this National Vision, of empowering all stakeholders to improve the effectiveness of Disaster Management in India. The Map of India, embossed in gold, in the middle of the logo, circumscribed by the National Tricolor of Saffron, White and Green represents the aspiration to contain the potential threat of natural and man-made disasters through Capacity Development of all stakeholders. The outer circle is a Golden Ring of Partnership of all Stakeholders, whose hand holding is an expression of their solidarity to supplement the efforts of the Government. NDMA in the inner circle in tranquil Blue integrates the entire process by empowering all stakeholders at the local, district, state and national levels. NDMA will catalyze this Community Empowerment through institutional capacity development, strengthened public awareness and community resilience by mainstreaming disaster management in India.

Policy for considering request, for use of NDMA’s logo